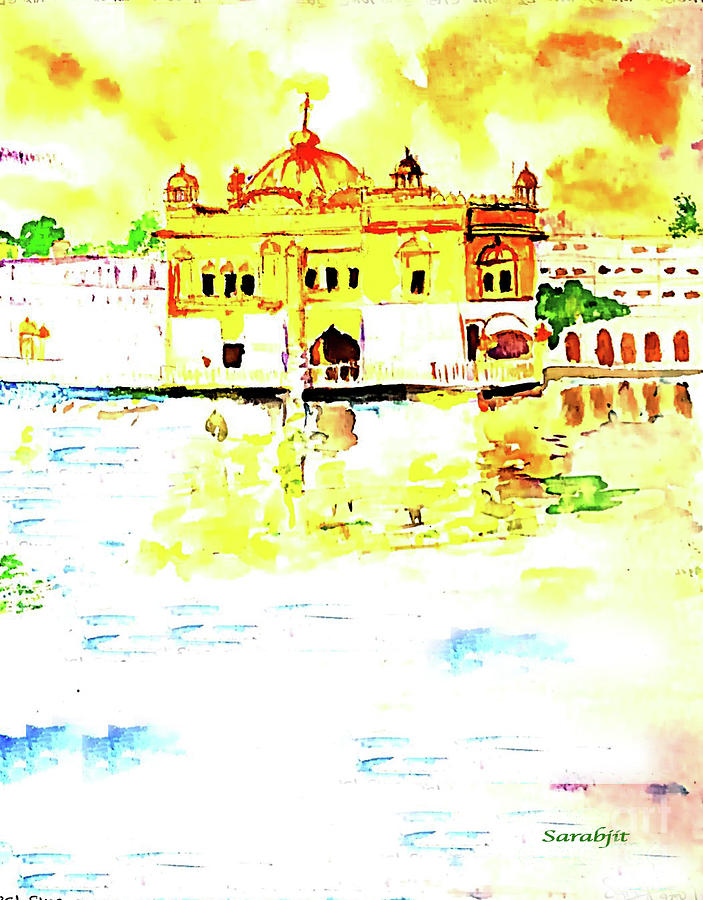 Original - Not For Sale

This piece is not for sale.   Please feel free to contact the artist directly regarding this or other pieces.

This was done as a collaborative art projects by various artists all over the US and I participated. The material I used is called clear print vellum. The Harmandir Sahib or Golden Temple was designed by the fifth guru of the Sikhs, Guru Arjan, who had the cornerstone laid by the Muslim Sufi saint Sai Hazrat Mian Mir on 28 December 1588. Guru Arjan completed the Adi Granth, the holy scripture of Sikhism, in 1604 and installed it in this Golden Temple
There are four doors to get into the temple, which symbolize the openness of the Sikhs towards all people and religions.Its exterior is plated with gold. Upon entering the premises,one is required to remove one's shoes (leaving them off for the duration of one's visit) and washing one's feet in the small pool of water provided;
Not drinking alcohol, eating meat, or smoking cigarettes or other drugs while in the shrine.
Dressing appropriately:
Wearing a head covering is a sign of respect, (the temple provides head scarves for visitors who have not brought a suitable covering);[20]
Not wearing shoes (see above).
How to act:
If you choose to listen to Gurbani (sacred hymns), then one must sit on the ground while in the main hall as a sign of respect to both the Guru Granth Sahib and God.

The temple runs one of the largest free kitchens in the world, serving 100,000 people on average daily. The meal consists of flat bread and lentil soup

Congratulations..Your stunning 'Golden Temple' painting has been selected as a weekly page feature in the 'Awesome Asia' group..Sarabjit..:)

This beautiful painting of the 'Golden Temple' in Amritsar,Punjab,India,is being featured in the 'Awesome Asia' group..Congratulations..Sarabjit..:)

the colors are AMAZING

Barbara thanks for choosing my art work. It is really great to be part of of this group.

CONGRATULATIONS your outstanding artwork is FEATURED in the highly viewed Art Group: MOTIVATION MEDITATION INSPIRATION! From the hundreds of pieces of artwork received daily to review and choose from, your work has been chosen because of it's excellence!