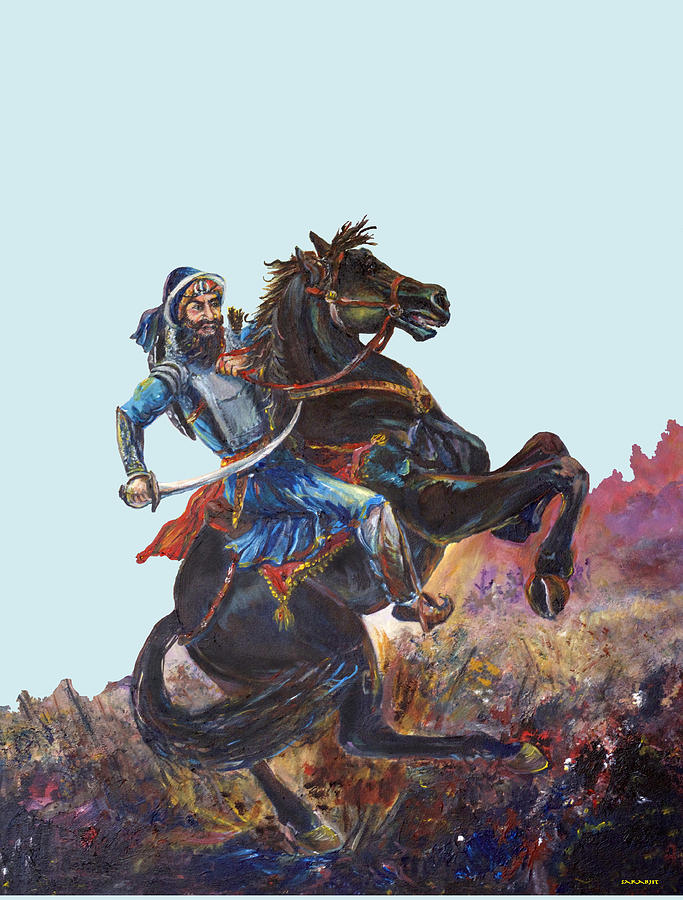 At 15 years he became an ascetic, and was known as 'Madho Das'. He established a monastery at Nāndeḍ, on the bank of the river Godāvarī, where in September 1708 he was visited by, and became a disciple of, Guru Gobind Singh, who gave him the new name of Banda Singh Bahadur. With the blessing and authority of Guru Gobind Singh, he assembled a fighting force and led the struggle against the Mughal Empire. His first major action was the sack of the Mughal provincial capital, Samana, in November 1709. He established his authority in Punjab, and abolished the zamindari system, granting property rights to the tillers of the land. He was captured by the Mughals and tortured to death in 1716. A really brave saint soldier.
I was commissioned to paint this picture. I tried to visualize the image of Banda Singh as he was fighting the Muslim rulers, did rough sketches till I was satisfied with the outcome. I wanted to portray his bravery along with his spirituality. So I took the help of the colors to convey the depth of meaning in this moment plucked from history and frozen on my canvas. For me it is priceless as for any true Sikh Art lover. I hope my version of Banda Singh will inspire everyone to fight against injustice without sacrificing their spiritual values.